Nebelung is a very rare domestic cat breed. Have you ever seen one? If yes, then you must have noticed their long bodies and those wide sparkling emerald eyes. Their long fur is denser than Evergreen Forest! Nature-wise, they are gentle and have a mild disposition.

Are you too intrigued by their name? Well! It is a blend of the German word ‘Nebel’ (mist/fog) and a Mediaeval Germanic saga, Nibelungen-Lied. Seems like a futile combination? Actually, it isn’t! Nebel resembles the bluish-grey coat of Nebelung. Furthermore, German warrior, Siegfried, and queen Brunhilde, two characters in Nibelungen-Lied, helped to derive the name for this breed’s progenitors. Interestingly, they are also known as Longhaired Russian Blue!

Want to know more about Nebelung cat? Scroll down then.

Before talking about Nebelung, it should be noted that it is a  new breed. In German, their name means ‘creature of the mist‘, which is a result of their alluring and gleaming, classy Silver-blue coat. The misty coat is more beautified by their shimmery green eyes.

Do you want to know the story behind this breed’s existence? Here we go then. Back in the early 1980s, there was a woman named Cora Cobb. She gifted her son a black domestic shorthair cat. As this cat matted with a Russian Blue male, one of the kittens had long, blue hair. Fascinated by this cat, Cora stood spellbound and called him ‘Siegfried’ with love.

Later on, in the mid-eighties, she saw another litter from her son’s cat. Guess what? A long, blue hair female kitten emerged this time. She was equally taken by this one and named her ‘Brunhilde’. Afterward, Cora thought of launching a breeding program with Brunhilde and Siegfried. This was because of their similarities with the Russian Blue, except the fact that they had a different coat type.

Like their Russian Blue counterparts, they have a strong built and are sporty. They are long as well as graceful. Along with their beautiful coat, they have pointed ears. To amplify their beauty, emerald eyes, which is often Yellowish in some cats, adorn them. These cats are highly affectionate and friendly. You can find them running around and playing with their ‘soft toys’, most of the time.

In addition, they are high on energy level, making them lively and playful creatures. They have a modified wedge-shaped head with a more rounded appearance than pointed and, on the top of it sit large and pointed ears. Their grey color coat with silver tips is soft and silky. When touched, this double coat feels like fine silk.

The hair on the tail is larger than that on the body. Furthermore, hair tuffets can be found in between toes, behind the ears, and in hind legs pantaloons. Their weight can vary from 7 to 15 pounds and they have a life expectancy of 13-16 years. Moreover, these cats are high on intelligence and can often amuse the owners with their smartness!

If you have seen a Nebelung, then you must have noticed that these cats are reserved, shy, and aren’t that interested in socializing. Right? However, this is not true. Although these cats have a reserved nature they are highly playful and affectionate. They love to climb over the kitty-condos and explore their immediate surroundings at glance!

They quickly assimilate themselves to the environment of the house and create a strong bond with the family members. However, they aren’t that comfortable to open in front of strangers and guests. These kitties are very loyal to their owners and family members and always crave their attention.

Although these cats aren’t that cozy with strangers, they are highly affectionate towards their owners. They constantly try to seek attention from near ones and are highly offended when ignored. They can even hurt themselves out of fear or anxiousness, due to lack of attention. This is so because they expect the same unconditional love and attention from their owners too.

Unlike other intelligent breeds, Nebelungs aren’t that destructive. Interestingly, although they crave the attention they can be often found playing with themselves. All you need for them is a condo and a wool-ball!

Nebelungs are also funny at times! Their innocent mistakes and ironic expressions might give you a sudden burst of laughter. They keep themselves as well as the owners entertained and never fail to mark their presence. However, you should remember they have a high sense of self-worth and on seeing you laughing at their mistakes, they might get triggered!

These cats are also living alarm clocks! Don’t be shocked. They are very particular about their meals being served on time. Moreover, they can also make you wake up from your deepest sleep just to get themselves served on time. In addition, they love to live in a quiet and stable environment where they can enjoy their own company or that of some near ones.

At last, they are one of those creatures who are affectionate, loyal, and loving to their owners. Their presence is always cherished and their ‘pitter-patter’ around the house excites the owners every time.

Just like other cats, this breed should also be fed properly, otherwise, they can drastically lose weight, making them weak and lethargic. In reality, a healthy cat is a result of a conscious and careful owner.

How to Take Care Of Nebelung Cats

The most attractive part of Nebelung is its smoky, shiny coat. To maintain its luster and softness, it should be combed regularly (at least twice a week) to make it free from loose hair and evenly distribute skin oils.

Cats address the high risk of periodontal disease, which damages gums and jawbones. To prevent your Nebelungs from this, make sure that you give them weekly teeth brushings. However, nothing is better than daily dental hygiene. Apart from this, as cats roam around, and even outside, they accumulate dirt in their nails. To remove this, trim their nails weekly, or else it might lead to infections in them.

When you wake up, you can see a white watery discharge accumulated in the corners of your eyes. This is similar in cats too! To remove this discharge from the corners, you can take a clean, soft, wet cloth. Remember, use a fresh area of the same cloth to wipe another eye, in order to prevent the risk of infections.

How can we forget the ears? Take a look at their ears and figure out if they require immediate clean-up. If so, take a cotton ball or a soft cloth moistened with cider vinegar and warm water (50-50 mixture). No cotton swabs! They are harmful to the interior part of the ears.

Nebelungs are very meticulous about bathroom hygiene. Therefore, make sure that their litter box is clean. If not so, they might not use it creating trouble for you. Therefore, this shouldn’t be ignored.

As Nebelungs are playful and energetic, it is risky to take them outside, due to the fear of accidents. Also, they are, like other indoor cats, at high risk of catching infections from other cats and dogs. Moreover, other infections can also be caught up by the cat, if not handled carefully. Therefore, it is important to keep these cats, as much as possible, inside the houses, by giving them proper space, love, and affection.

It is well understood by now that Nebelungs have a shiny coat and are highly attractive. Their long body and looks similar to Russian Blue leaves all the cat lovers flabbergasted. They are sweet as well as adorable. Although they are not so open and comfortable with strangers, they are equally loyal and affectionate towards their owners. They can be seen craving for their owner’s attention and at the same time, they can be seen enjoying their own company.

Well, a beautiful cat with such interesting shades of personality is always good to have. Owners are not only amazed by their cuteness, but also by their intelligence and loyalty. Last but not the least, rather than reading all the amazing experiences of cat owners, with Nebelung, it’s better to have one for yourself. So, when are you going to get one? 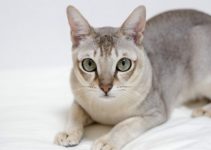